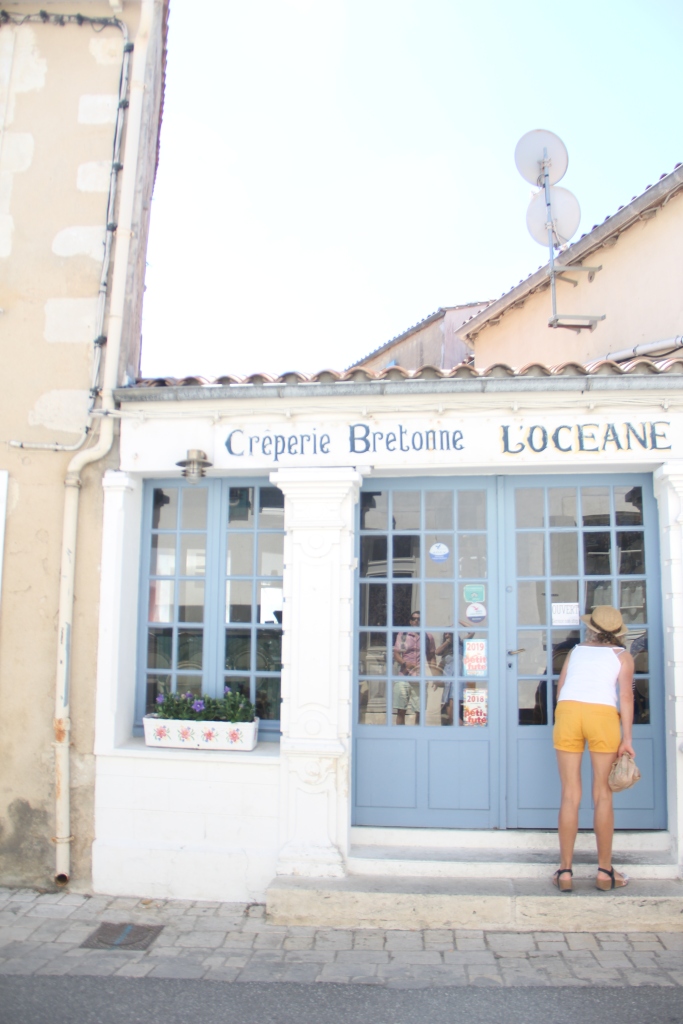 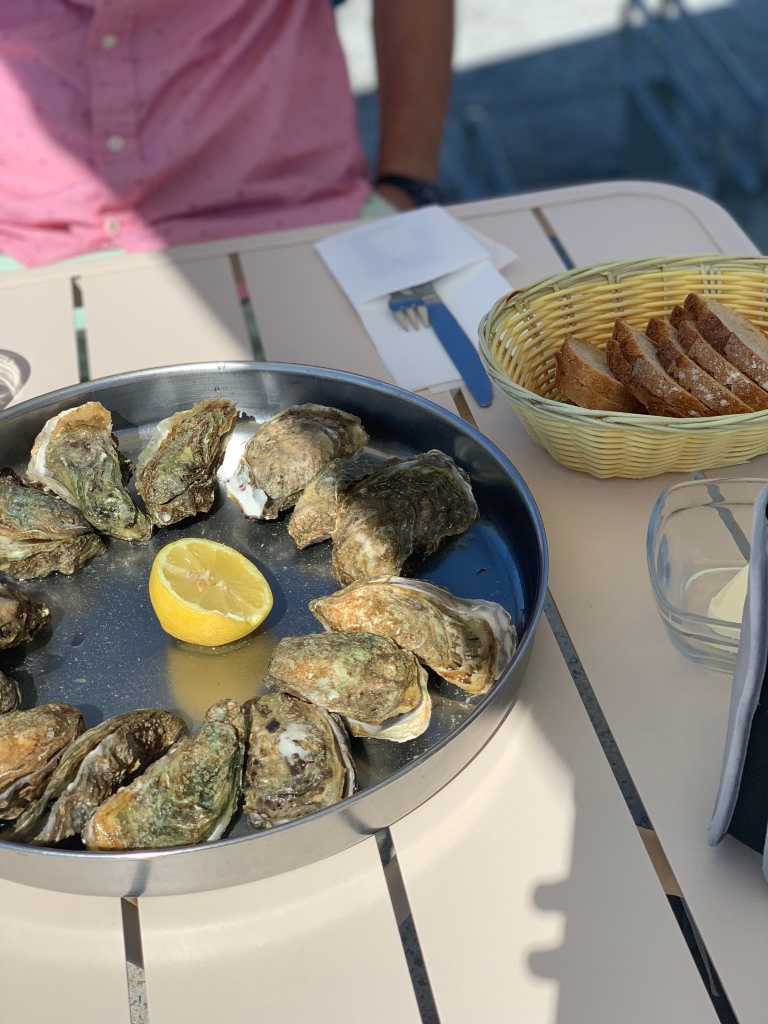 Quiet, deep minty-green shutters and a soft palm. Seagulls gently calling out over the orange rooftops. Warm sunrise glow, deep and rich like a sunset. A slow form of breathing returns, fresh air. Sweet air, creeping in from the tiny crack where the shutters meet and loosely hang open.

It is my 29th birthday, and I am on the island of Île de Ré in France.

I spent my birthday eating oysters and riding a bike through French market towns and salt marshes. My 29th birthday, which began with waking up early in Saint-Martin-de-Ré on very little sleep, not wanting to waste any of the day. It was 6:00 am, and I had the morning to myself. A pastel sunrise taken in through open shutters, blowing slowly in the breeze that had cooled the village overnight. Green tea before my morning run, alone, through a still asleep harbor town. Moving along the bike paths, through the fields, and a vineyard along the sea. I saw three other runners and a white horse. By the time I returned to the town around 7:45 am, people were beginning to wake up and to clean the streets.

At 9:30 am, we left the Airbnb to rent bikes for the day from the shop around the corner. There was a very old, sleepy golden retriever lying in the entrance, and the woman at the counter was especially friendly; one thing we have observed is that everyone that we have interacted with here from the shopkeepers to the bus drivers to the airport border police is more relaxed and openly enthusiastic compared to other places that we have visted in France. The bike shop woman made copies of our American IDs and was surprised that we had even heard of the island.

By 10:00 am, we had our bikes, and our day journey began in the direction of the island’s northwestern tip. First stop, Ars-en-Ré.

The ride was gorgeous. Sea spray, salt marshes, oyster shacks, small stands selling salt with honesty boxes to collect payment. We saw families, couples, intense bikers, an old man with a dog in his basket. It took a little less than an hour to arrive in Ars, and once there, the very first thing we did was go to the market. We had read it was one of the best on the island, and it was everything I had imagined it would be and more. There were baskets, fish, fresh vegetables and fruits, wine, oysters – everything, all in typical French charm. Here, I finally found (after searching everywhere I go in Europe) an orange flower scented candle, my favorite smell. And I also bought three gorgeous film photography prints of the island from a local photographer. His work, a summer project, supported conservation and the local salt industry, and I just loved the photos. We bought artichocke and citron tapenades with crusty bread from a stall outside. Inside, we gathered fresh strawberries, oysters, and white wine to complete our mini, perfect DIY feast, which we ate standing at a table inside the main market building.

We walked a bit more around Ars after eating. Like Saint-Martin-de-Ré, it was cobblestones, hollyhocks, and pastel shutters. There was a carousel in the center and one of the most unique church steeples that I have ever seen – a Gothic, tall, blac pillar on an otherwise bland stone building. We loved Ars. Still, we retrieved our bikes from the waterfront and continued on through the salt marshes. Twenty minutes of riding later, and we were at the lighthouse, Phare des Baleines, surrounded by it’s own summer neighborhood of souvenir stands and food. The very first thing we did was get icecream, which was a great decision. There were so many flavors – it was seriously challenging to decide, but ultimately, I went with citron vanille and lemon meringue. We walked out to the lighthouse itself, but didn’t climb it. Instead, we lingered on the seawall, mesmerized by the limegreen of the beach seaweed and the mechanics of the tide working its way back toward the sand dunes. It reminded me of New England, raw and what always seemed to me from childhood experience to be most real. Not turquoise nor palm speckled, but a beach as I have always known a beach to be.

We bought more water from one of the stores to rehydrate, then biked shortly back down the path from which we arrived to detour to the beach ourselves. It was around 1:30 pm, and the beach, though mostly empty when we first arrived, was full of French families and children playing in the waves before we left an hour later. I waded through the water and found some oyster shells. The water was neither cold nor hot, just perfect. I loved it. We napped in the sun.

An hour-ish later, we returned again to our bikes to continue on our way to Les Portes-en-Ré, the farthest out little village on the island. In Les Portes-en-Ré, it was quieter. Maybe it was the time of day. For the most part, we had the hollyhock-lined streets to ourselves. After buying more water, we began our return journey, this time opting to bike through the salt marshes of Loix, stopping along the way at one of the unmanned salt stands to purchase sea salt caramel and sea salt caramel pops. We had wanted to go to a specific oyster shack on the route that we had found online, but when we arrived there around 5:00 pm, we found it closed. Instead, we found a different oyster shack down the road where we ordered in broken French and split a plate of 14 oysters and a bottle of white wine between us, enjoying the day, sitting there in the sun with good food and no place to be.

We biked the rest of the way home through the vineyards and along the sea. It was 6:30 pm when we returned to Saint-Martin-de-Ré. We had biked 45+ kilometers and had the sun to show for it.

Somehow, after going home to shower and change, we found the energy to venture out for dinner. Our criteria was simple: we ate at a place on the harbor, simply because earlier we both had commented on how much we liked the classic blue and white French bistro chairs on the patio. I had a glass of champagne. The food was good, but it came faster than we expected and wasn’t very filling, so we struggled to finish the entire bottle of wine we had ordered with it. To mitigate, after we paid the bill, we walked across to the îlot and sat to order crêpes. After that, I was too full for ice cream for the second night in a row.

The sun set. The town was once again violet-orange. No fireworks tonight; the people began to slowly disappear. I was exhausted, but so full.

It was the best day.

Our last morning on Île de Ré of this very quick, but very worth it, trip. We ran together along the bike path where I had run the day before; then left to spend our last few hours in town. Our first stop was across the street to see the famous Anes en Culotte, or “donkeys in pajamas,” that are a sort of mascot for Saint-Martin-de-Ré. The donkeys are Poitou donkeys; because of their strength and large size, they were originally brought to the island to work in the salt marshes, where they were often bothered by bug bites. To solve this problem, the owners would have them wear special trousers, and though the donkeys no longer work in the salt marshes, they continue to wear their trousers, primarily as a tourist attraction. For three euros, children can ride them all around the park

It was another hot, bright day. We tried to eat at a few places, but found none of them served food until noon, so we browsed the harbor shops instead. Time passed at a perfect pace. At noon sharp, we sat at a cafe on the shopping street that had caught our eye because of the salad menu. I had a local special salad with fish pâté, eggs, and the most delicious fresh tomatoes. It was a good meal. We walked back along the harbor, and finally, we had ice cream from the harborside shop. Salted caramel and chili pepper for me. We sat on a bench on the bridge to the îlot in the sun and ate our icecream cones, watching the people and wishing we never had to leave.

We did have to leave, though. At 1:45 pm, we had our bags and walked to the bus. The 2:15 bus never came, so we waited until 2:50, nervous about missing our flight, but it turned out to be fine. The airport was small and quiet, and there was no line when we arrived. Walking out into the bright sun across the pavement to board the plane, I knew that this is a place I will come back to  – and a place that I will still be thinking about for a long time.

Via: Direct flight from London Stansted Airport to La Rochelle Airport; then, a bus from the airport over the bridge to Saint-Martin-de-Ré (turn right when you exit the airport, and the bus stop is on the sidewalk nearby)

You can read more about our first day in Saint-Martin-de-Ré, here.