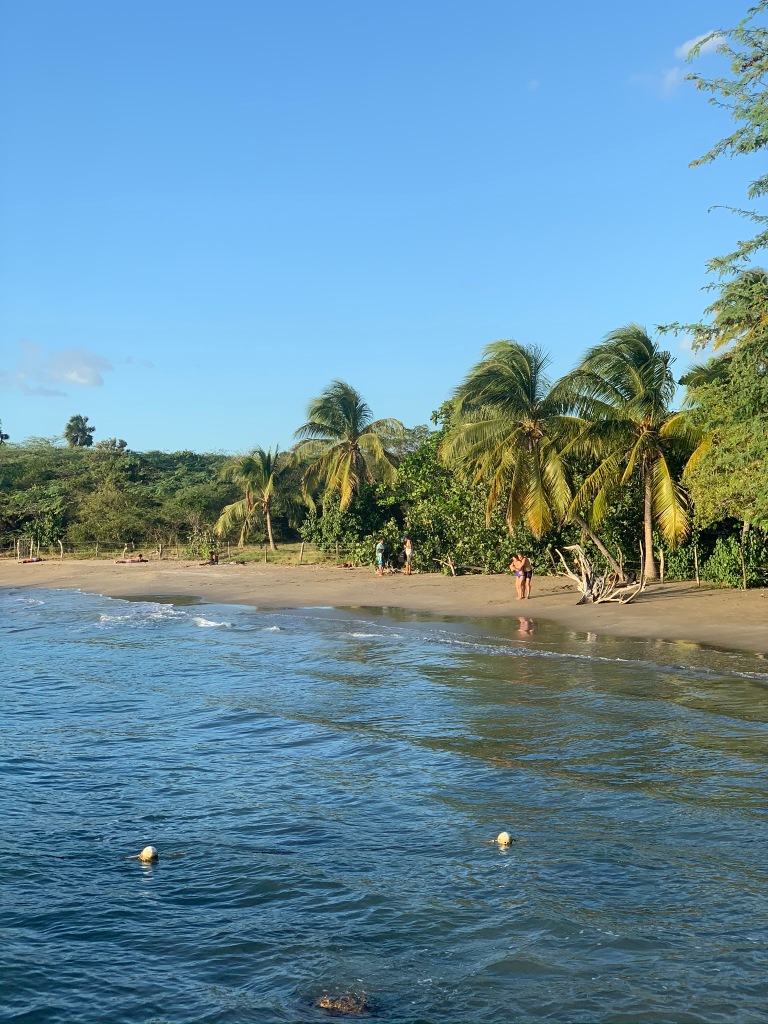 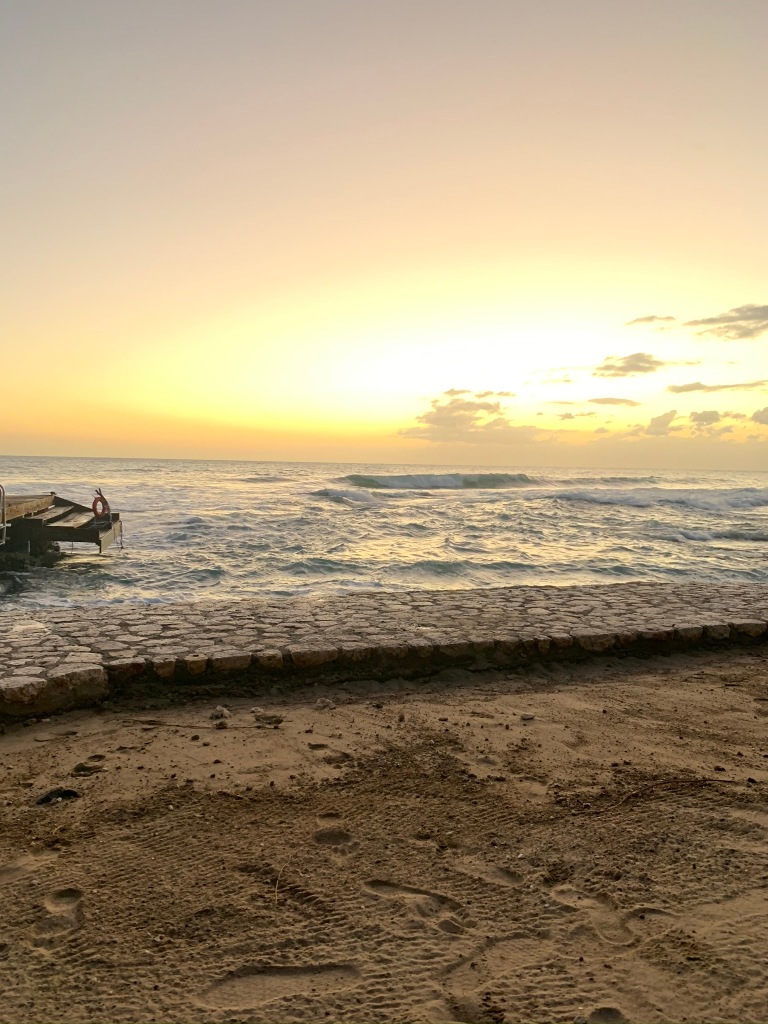 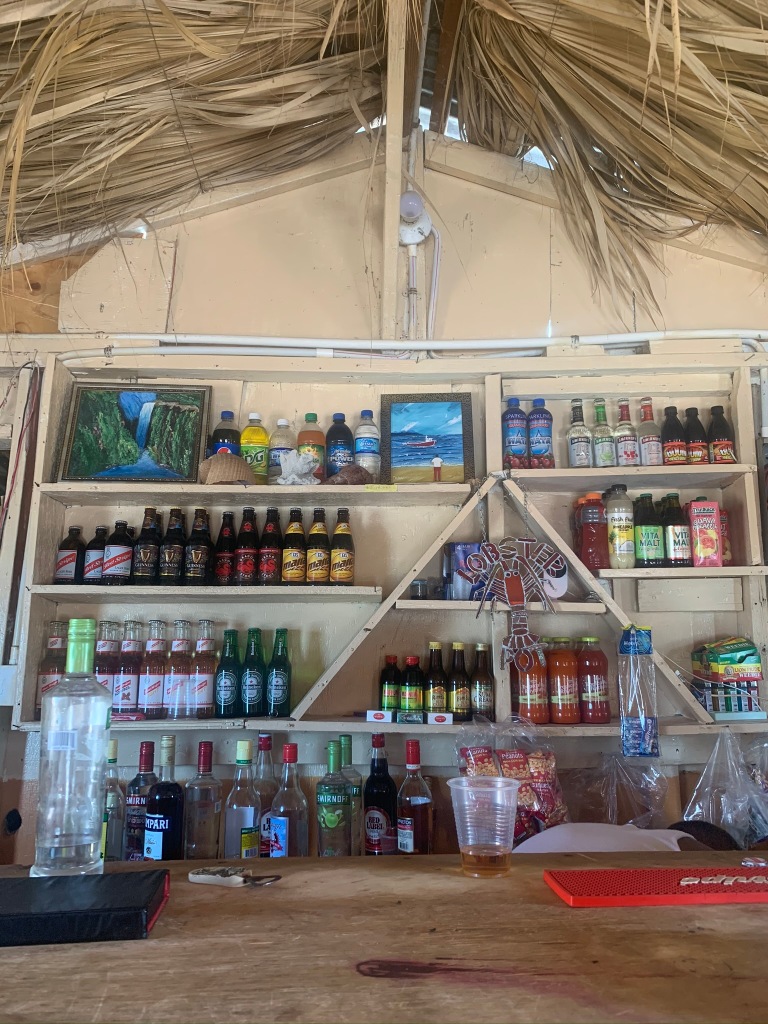 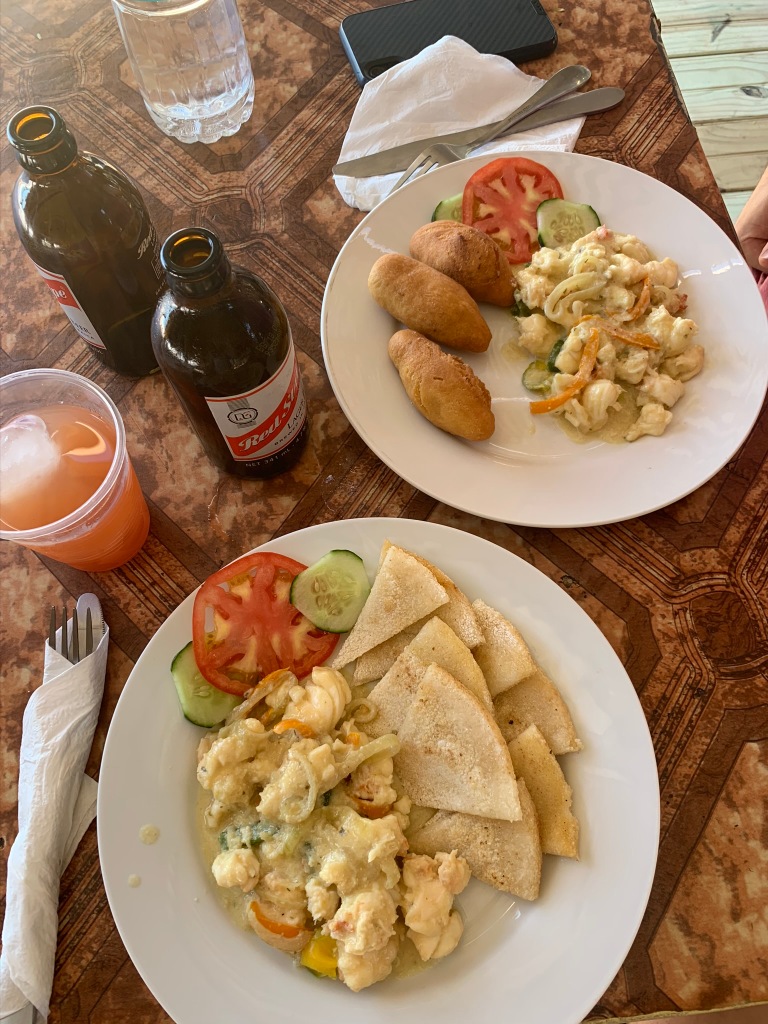 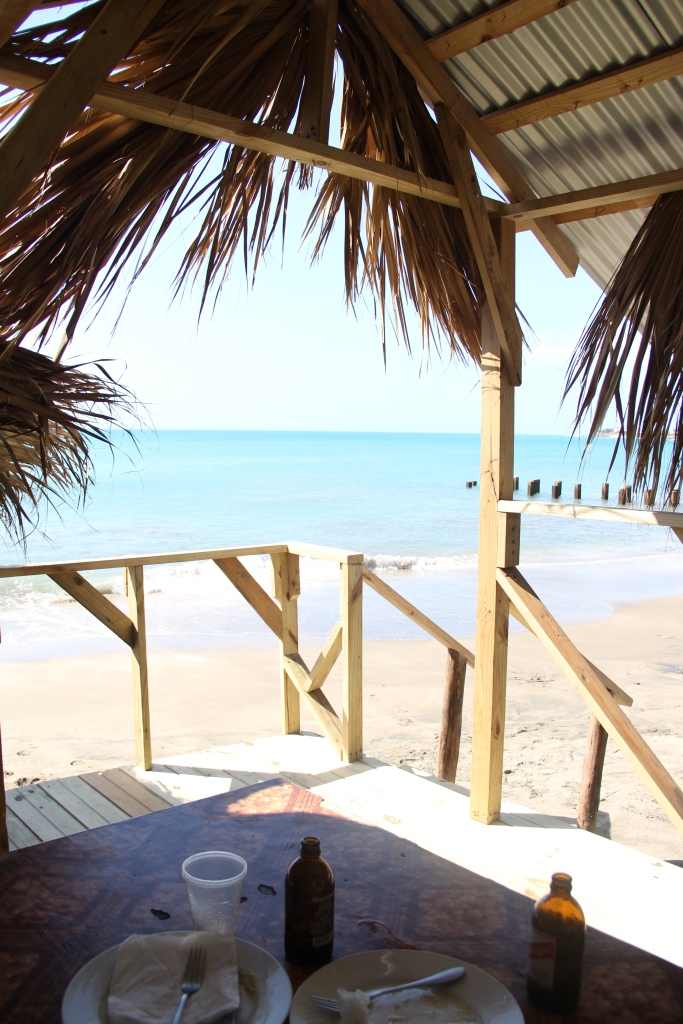 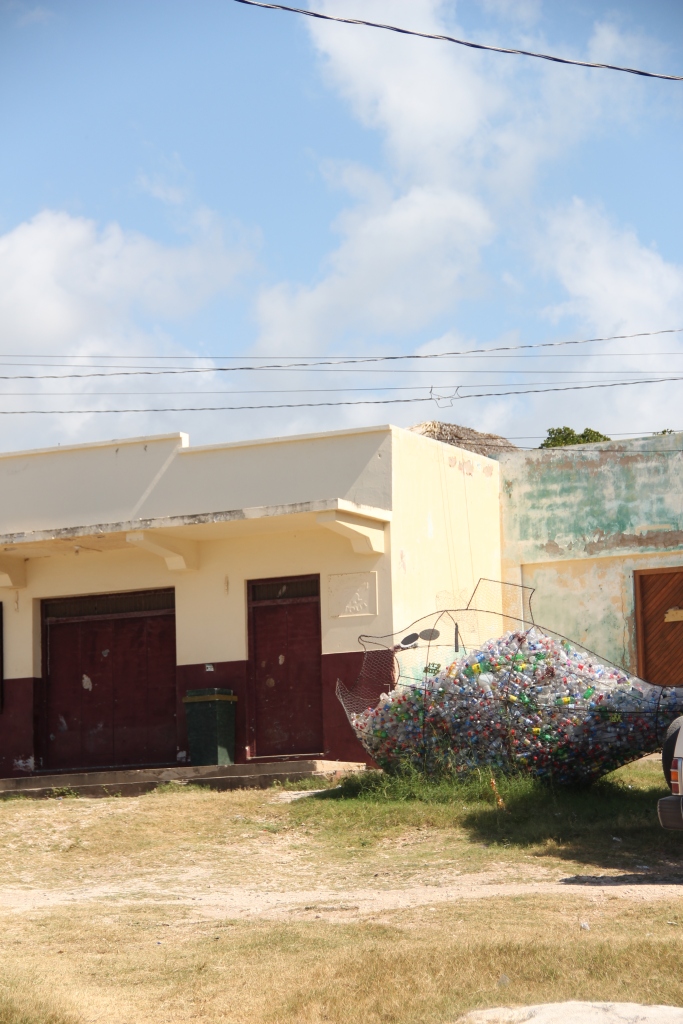 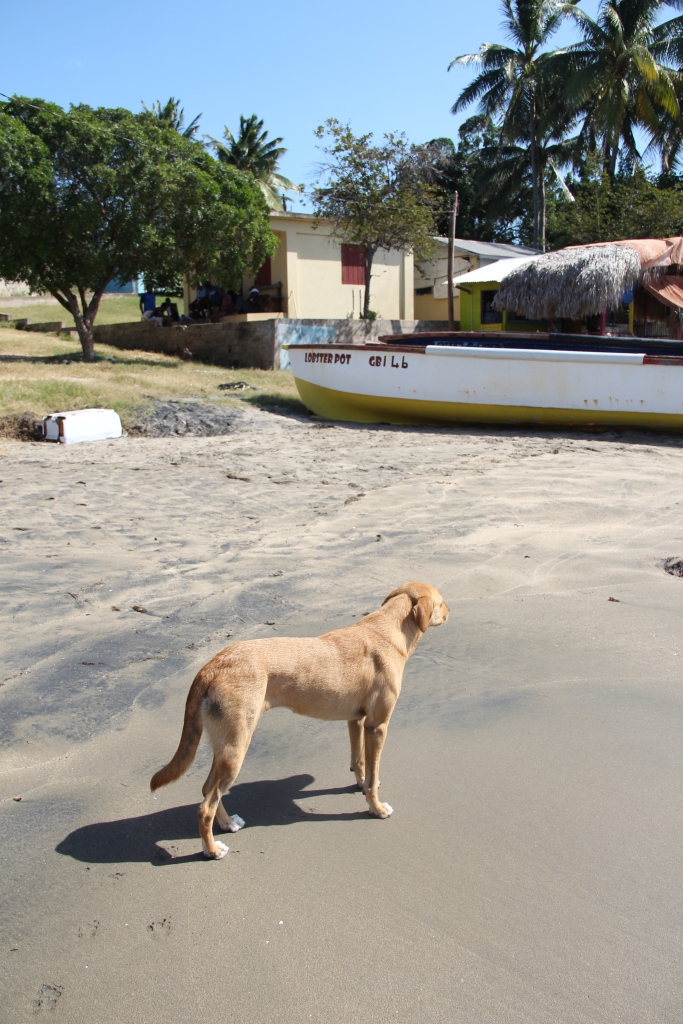 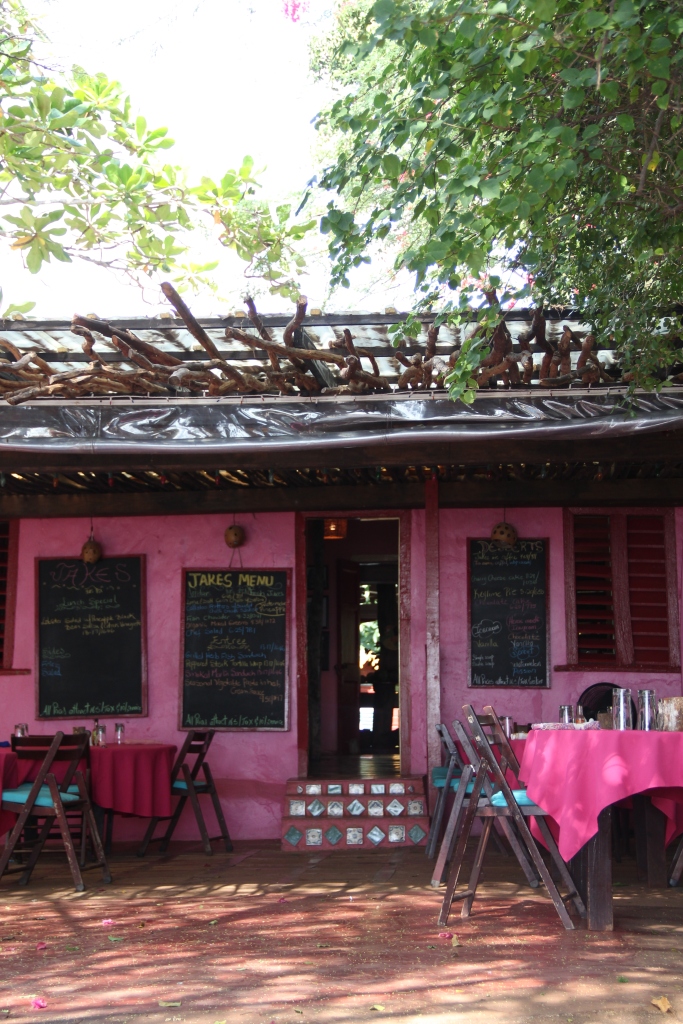 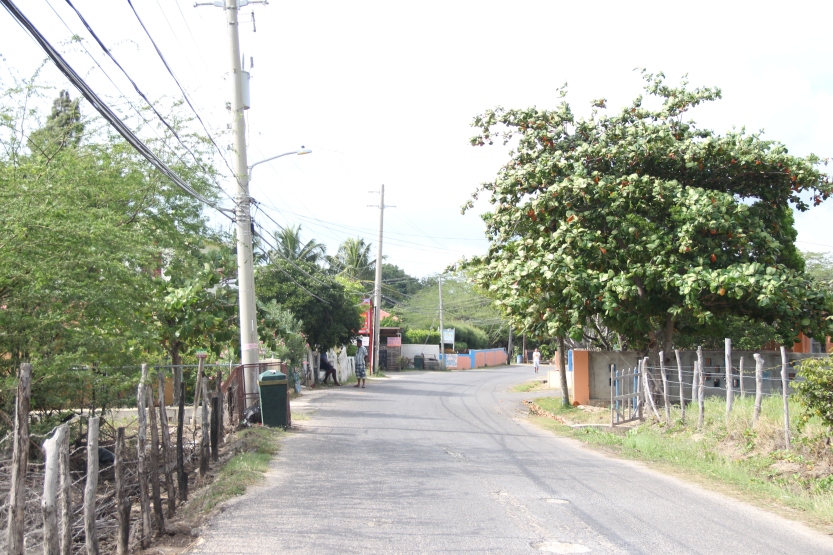 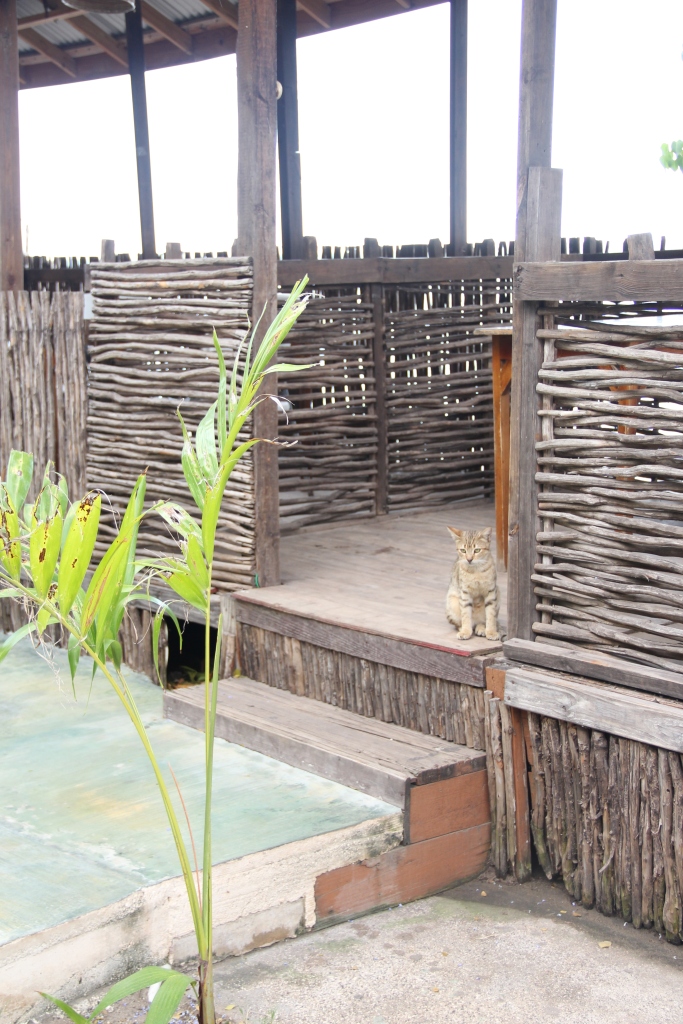 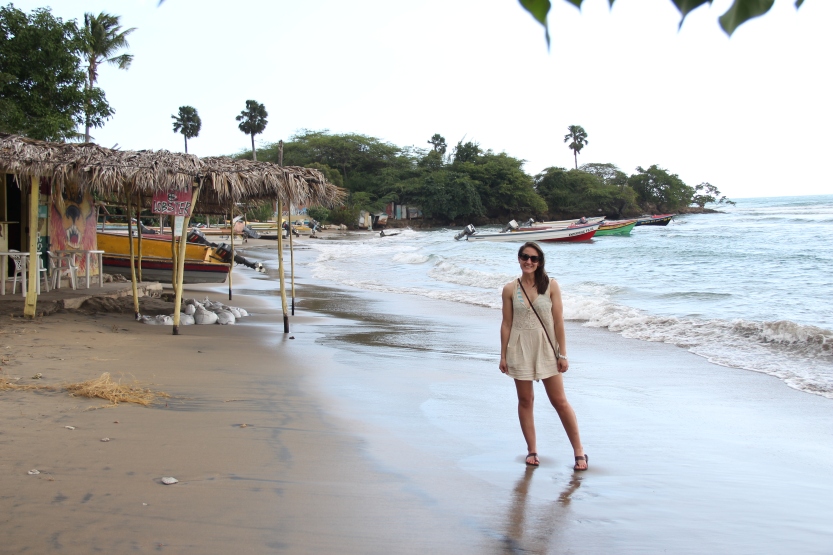 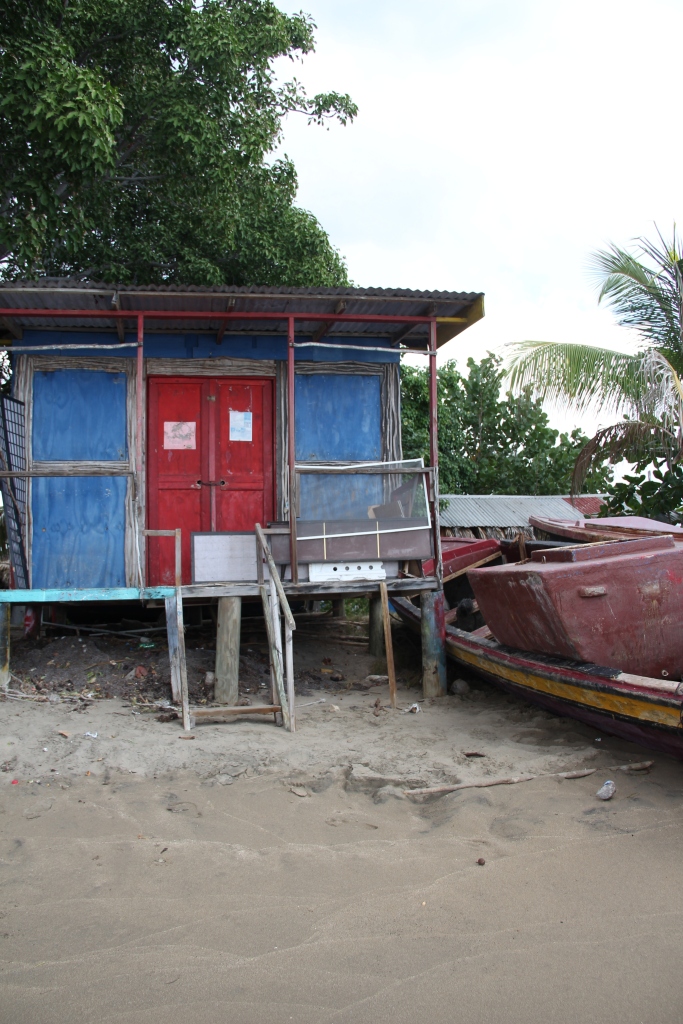 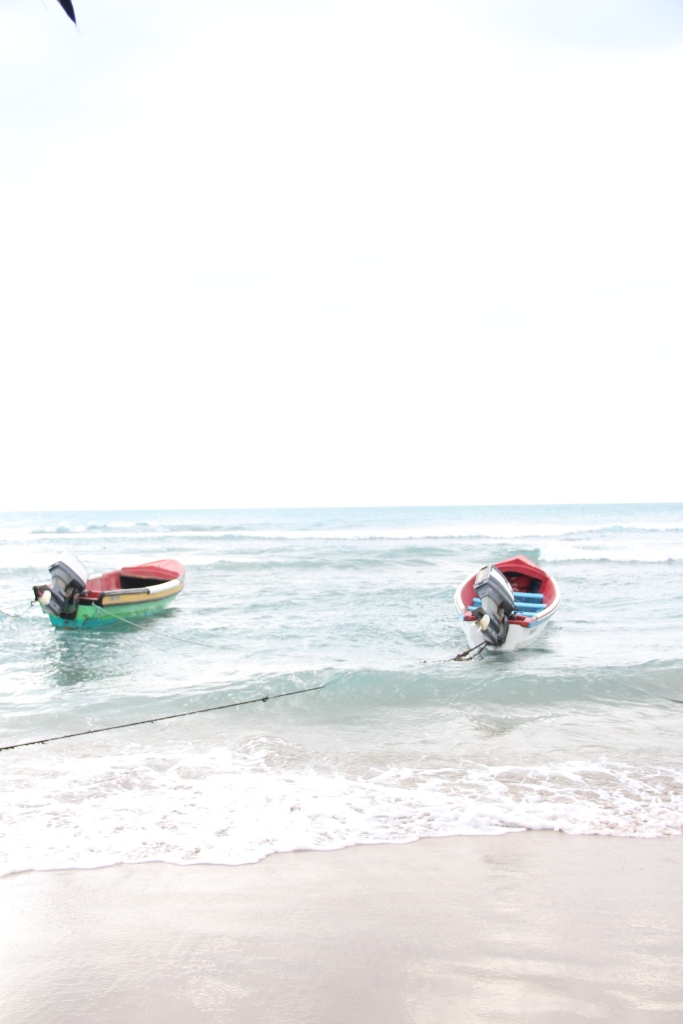 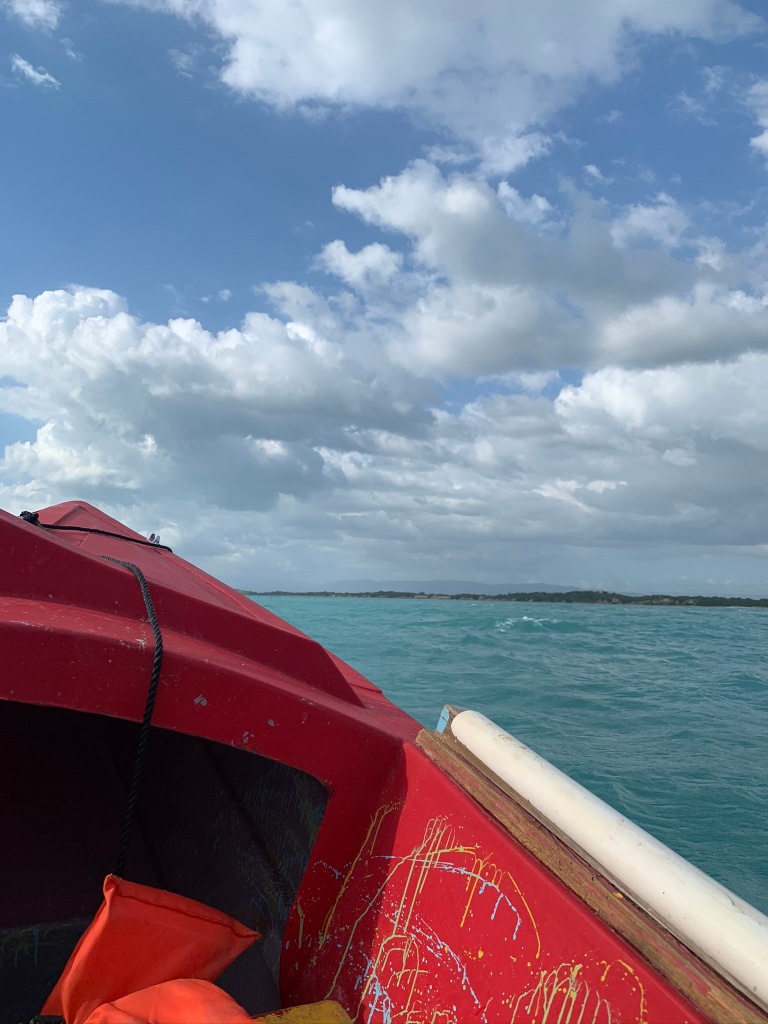 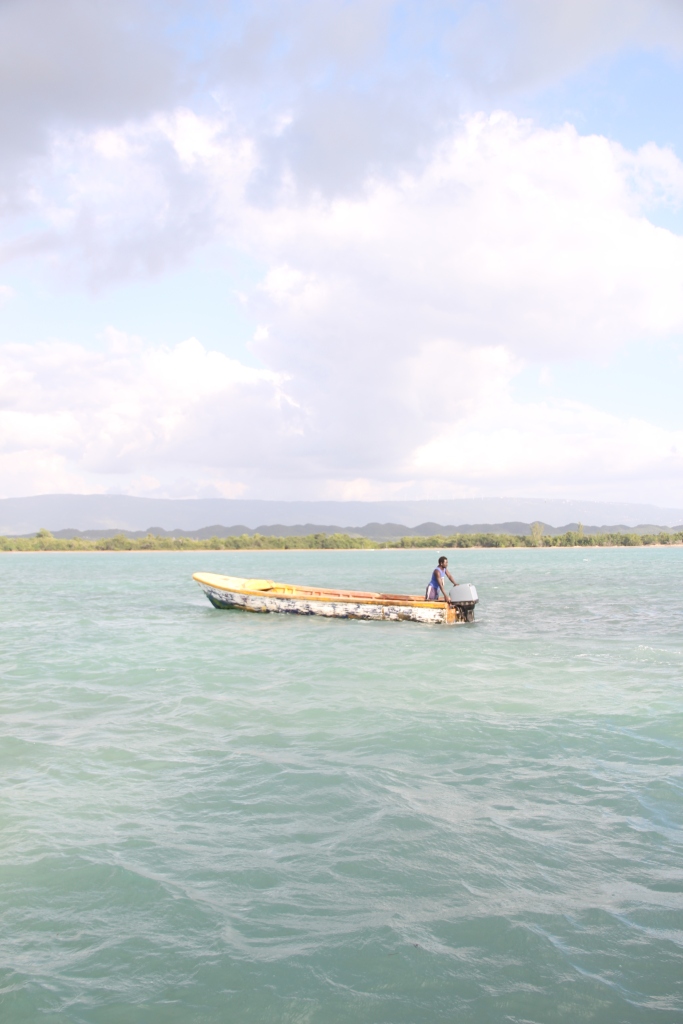 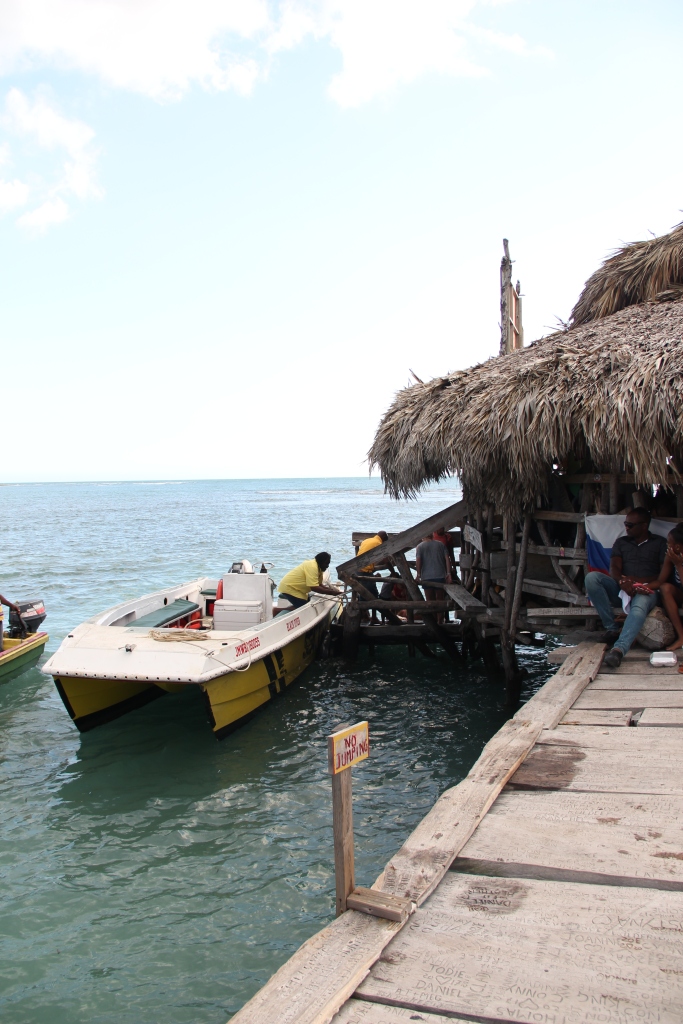 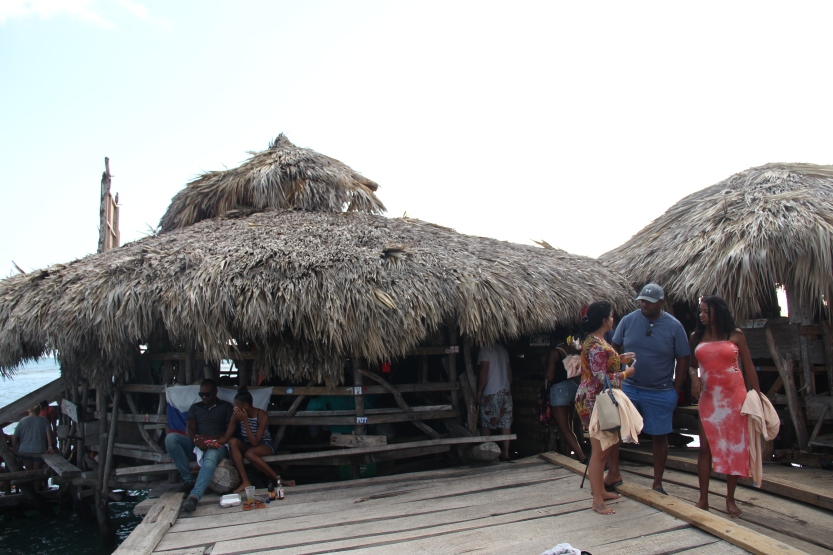 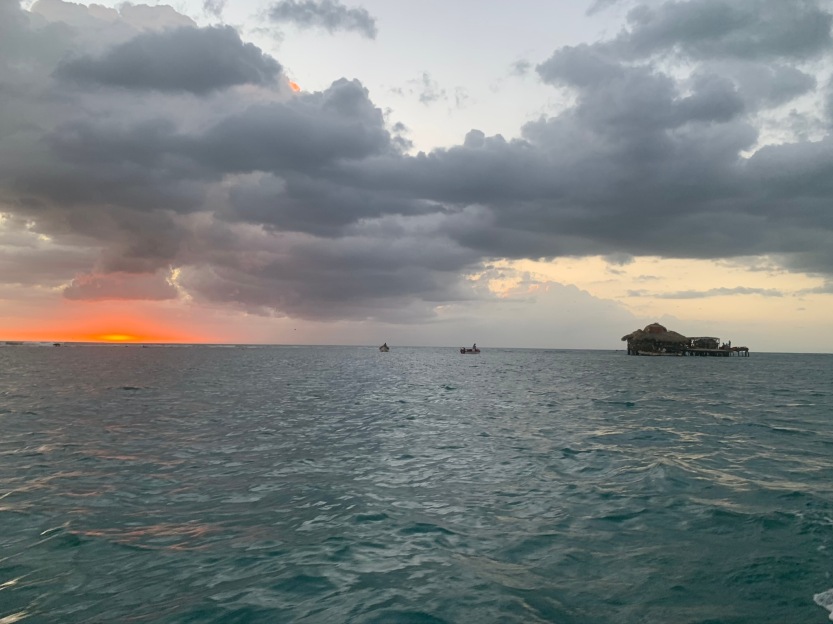 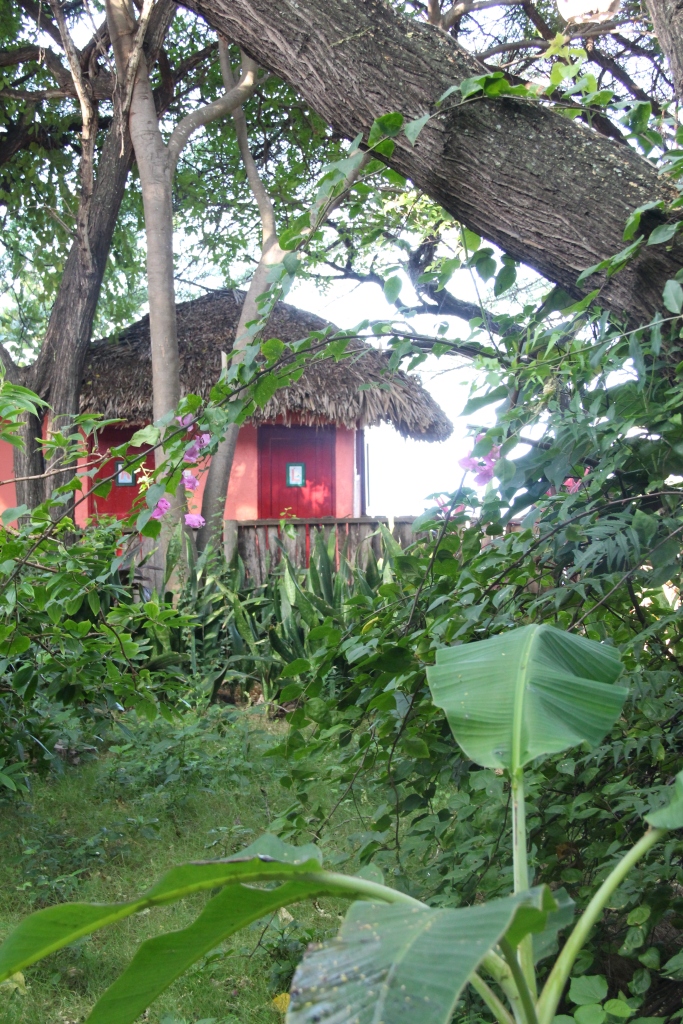 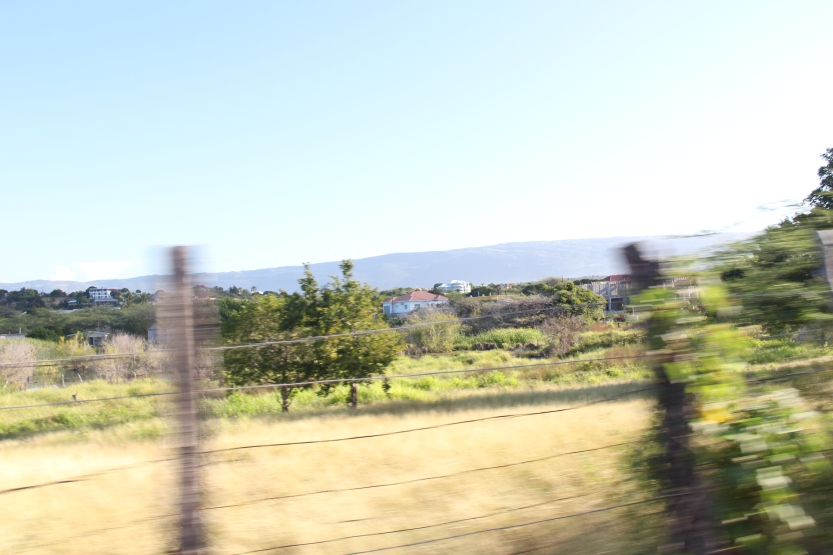 Waves crashing, falling asleep to the sound of soft violin. No rush, and nowhere to be.

We originally planned to spend nearly a week in Jamaica, flying into Kingston and splitting our time between the east side of the island near Port Antonio and Treasure Beach; then, the day we were supposed to travel, I was suddenly too sick to travel, so we had to reschedule things a bit, which meant a very short trip to only Treasure Beach. Treasure Beach, though, was amazing.

Our new flight was to Montego Bay and left on Tuesday morning from Fort Lauderdale airport (we chose FLL because we had a wedding to go to in Miami upon our return, so it made sense to drive there from Tampa before our Jamaica trip rather than after). In total, the flight time was less than two hours. Montego Bay airport was busy; a bit chaotic, busy, bustling. It took a while to get our rental car sorted and there wasn’t any working WiFi that we could find, but otherwise it was simple enough to navigate.

The first thing I noticed when we stepped outside was the smell of warm weather. Then, the green mountain backdrop. We began the drive to Treasure Beach, first through the multi lanes and roundabouts of the city, past resort signs and beautiful blue sky sea. And then, suddenly, it was just us along on a narrow road cutting through the mountains. Colorful, tiny houses dotted the hills. Occasionally, we’d pass small and seemingly random bars and stores, community gathering points.

Two hours later, we crossed into Treasure Beach and driving here felt instantly special. It’s simple; dirt roads and quiet, colorful structures. No gates or walls. Far removed from resort-land. A giant sign proclaims, “Welcome to Treasure Beach, Home of Community Tourism.” A bit of history: I read that Treasure Beach developed a tourism economy much later compared to other parts of the island. Because of this, the community was comparably much more intentional and deliberate with including residents in the system design process. Essentially, everyone has a stake. This, combined with the fact that this particular part of the island is not close to the airports, challenging to get to without a car, and relatively undiscovered makes it quite literally one of the safest and most local-oriented tourist destinations on the island.

We stayed at a place called Jake’s, which we honestly stumbled upon mostly by accident during our pre-trip internet research. I’m so glad that we did. Jake’s is a resort, but not in that traditional resort sense; it’s community-led, not gated or cut off from the neighborhood, and serves all locally sourced and grown food. There’s morning yoga, farm tours, bikes for rent, a spa, hikes. It’s relaxing, exciting, and – most importantly – not exploitative. Our home for the next few days was a simple and adorable pink cabin with lounge chairs and a patio surrounded by flowers and trees. I could hear the waves crashing at all hours, even with the doors and windows closed. So simultaneously energizing and peaceful.

After doing a lap around the property, we settled into Dougie’s, Jake’s on-site bar, where we ordered rum punches and sat in adirondack chairs behind the beach wall, watching waves smash into the shore and toss around the trunk of a palm tree in the foam. Only two other people besides us were there at the time. The rum punches were amazing. Later, we went back into the cabin, changed into bathing suits, and then walked five minutes along the edge of the water to Jake’s public sister bar and beach, Jack Sprat. Full disclosure, the rum punches at Jack Sprat were not *as* good as Dougies, but they definitely weren’t bad. We drank water from a coconut and swam in the sea. It was so blue! Shallow and warm. There were a few other couples. For the most part, it was quiet. The perfect long, slow afternoon on the beach. We had some more drinks, then walked home to shower and change for dinner, which we ate outside on the patio at Jack’s after watching the sunset with more rum punches at Dougies. Dinner was fresh and filling, lots of seafood and veggies. The menu is written daily on a chalkboard hanging nearby. We went to bed after dinner; the chalkboard would be completely rewritten by the time we saw it again for breakfast.

The morning began on the same patio. For breakfast, we had the local ackee (a fruit) and saltfish speciality and porridge with fruit. After eating, via the staff at Jake’s, we rented bikes for the day from the local activity guide and secured them behind our cottage, then went for a run down the dirt roads and eventually along a lakeside path. It was a hot, beautiful, sunny day.

We showered, packed backpacks, then took the bikes out back in the same direction that we had run to a stretch of gorgeous beach spotted with a rainbow of fishing boats. Here, there was a seafood shack that we had heard great things about, and we wanted lunch. Literally, it was a beach shack. Water rushed up to the edges and over the sand floor. Casual, informal, chill. It wasn’t immediately obvious where to go if we wanted to eat, but when we asked the locals chatting nearby, one of them was happy to lead us inside to the counter and take our order. We both ordered stir-fry style garlic lobster, one with a side of bammy (cassava bread) and one with a side of festival (dumplings), and then we waited in the shade, watching the waves roll in while drinking rum punch and Red Stripe. A dog walked across the sand. Another couple sat nearby. We saw the activity guide from Jake’s, hanging out with his friends. A man pulled fish from the water, one at a time, and carried them to the shacks that lined the beach. Another man pulled a giant, massive and moving crab from the water and brought him close to show us (then tried to sell us weed and immediately left when we weren’t interested). The food took a while to prepare, but when it did come, it was wonderful.

If we were spending more than just a few days on the island, we probably would have stayed on that beach and explored the surrounding area all day. Instead, we biked back (a different, more challenging way around the lake) to Jake’s to inquire about taking a boat out to the Pelican Bar, a bar built on a sandbar in the middle of the sea off the coast of Treasure Beach. The seas were good. We could go out with a local captain in an hour. In the meantime, we returned our bikes, walked to Frenchman’s Bay nearby, and had a drink at a bar on the beach where the water literally rushed up and surrounded our feet as we watched more rainbow boats bob on the water. This was until we found Captain Kevin and his “Mr. Nice Guy” fishing boat.

Kevin and a friend helped us climb into his boat and then we were off – it was wild! A rollercoaster, up and down, speeding fast along Jamaica’s undeveloped, untouched green tan south-western coast. The sea spray was warm. I silently wished I had asked for a life jacket. We flew.

Half an hour later, we were at a tiki hut stilt bar in the middle of the sea, and we definitely were not the only people there. Large tour boats from Negril and Montego Bay came and went, transporting groups for a couple hours at a time as part of day trips to this part of the island. Normally I don’t love crowds, but the crowds here gave the place a good energy. The entire wooden structure is covered with carvings, flags, license plates, stickers, and more markings from people all over the world. We ordered rum punches, waited for a spot on the edge of the dock to clear for us to sit, then settled in for the next few hours. Boats and people; arriving and departing. It was good people watching. Before we knew it, we were some of the only nonlocals left, and Captain Kevin urgently wanted to leave before it became dark. Very suddenly, we were back on the boat. Yellowgrey fire sky. Bright blue water fading to blue grey. Orange ball disappearing into the sea. Racing the light. Again, we flew. Closer to shore this time.Sea spray just as warm. Stars dotting the sky. It was magical.

We arrived back just as it became dark. Salty, sandy, sad for the day to end. For dinner, we decided to keep it simple again. We went back to Jake’s, where we knew the food would be good and easy. There, we split fresh tomatoes and fish spread, a bottle of wine, ate seafood. It was, once again, so good. So peaceful on the patio. Instead of dessert, we walked a few steps to Dougies for Dirty Bananas. And then we sat on the adirondak chairs again, sprayed by the sea, taking in all the suddenly-so-visible sea of stars until it was time to go to sleep.

Our last morning on the island, just a flash. I woke up and did a short run as the sun rose. We had one more patio breakfast, more ackee and saltfish. Yogurt and granola. We were on the road back to Montego Bay just after 8:30 am. Back through the mountains and hills. Along narrow dirt roads and past rainbow houses in the hills, stuck behind a single motorbike for most of the way. Eventually, into the city, on the edge of the water, back to the airport. Our flight back to Fort Lauderdale left at 12:30 pm.

I didn’t expect to love it here so much; I was skeptical after struggling to find much about travel on the island beyond its resorts. Treasure Beach, though, was special. Jamaica, open and uncontained, exactly as we had hoped to see it.

Honestly, I want to come back.

Via: Flew from Fort Lauderdale airport to Montego Bay; rented a car and drove two hours to Treasure Beach. A lot of people warned us it would not be safe to rent a car; we did *not* feel this way at all. However, the roads *can* get very narrow and windy in the countryside and very busy/chaotic in the city. Plus, cars drive on the left side of the road (like England). We are used to all of these things, so it was fine for us personally, but something to consider.