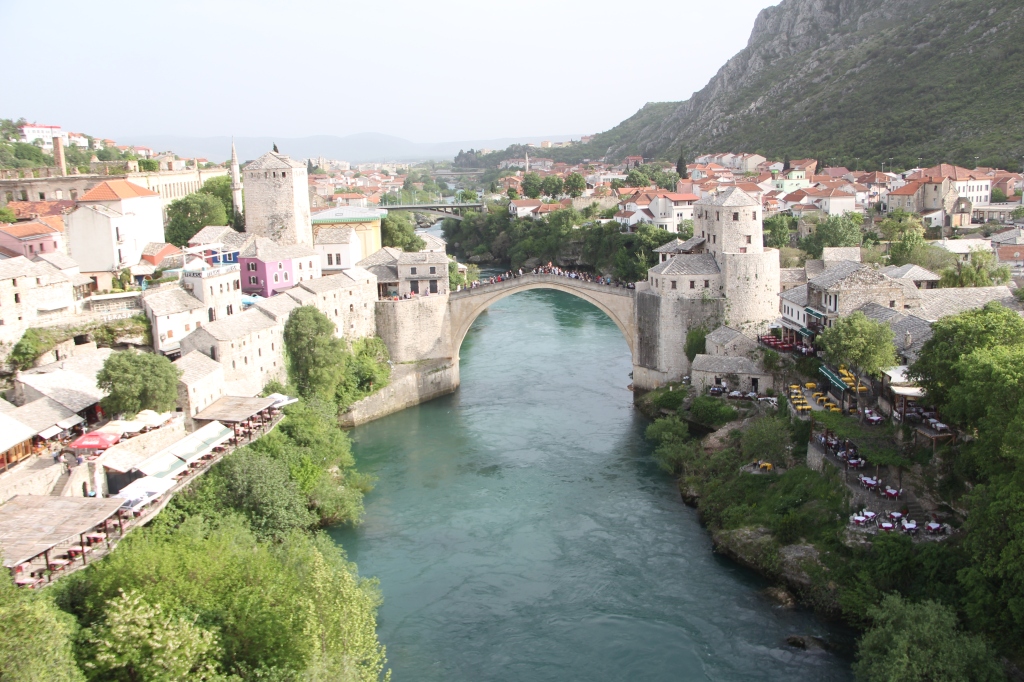 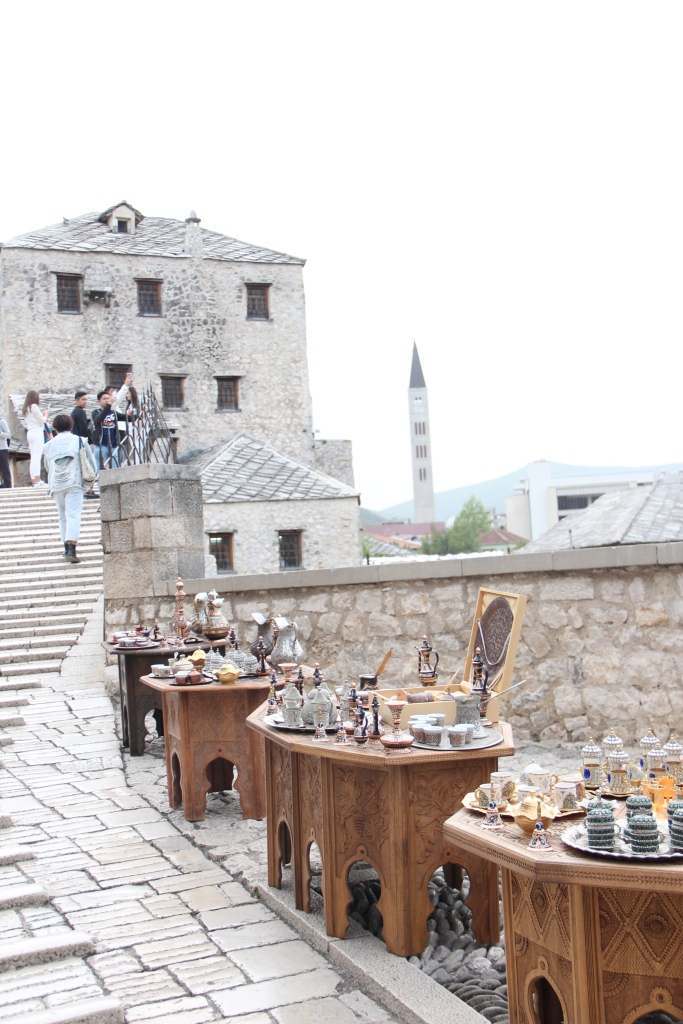 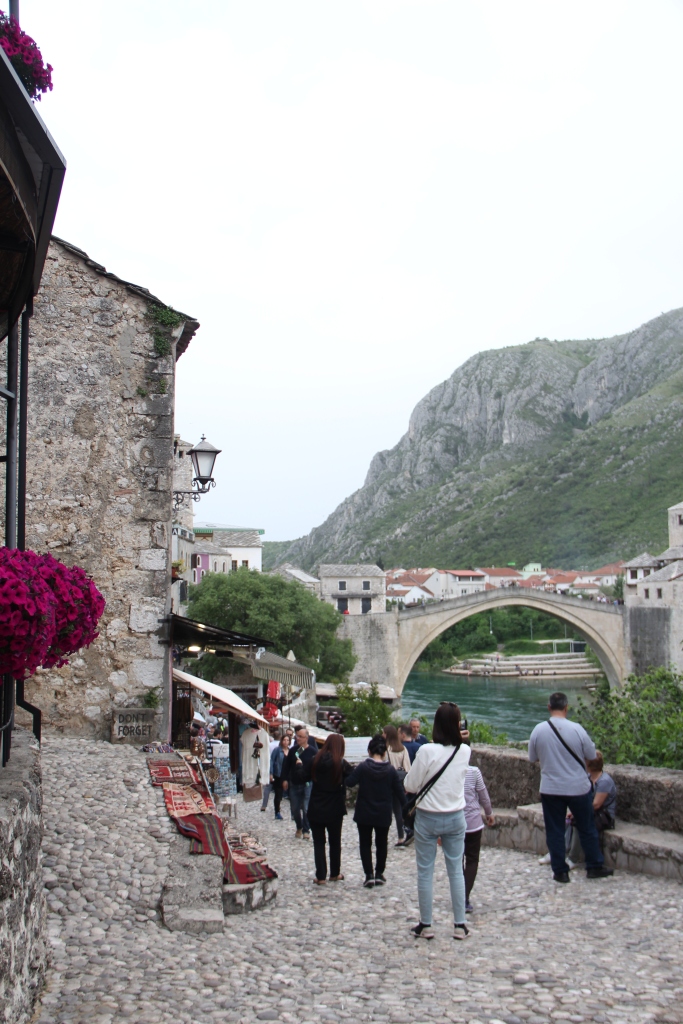 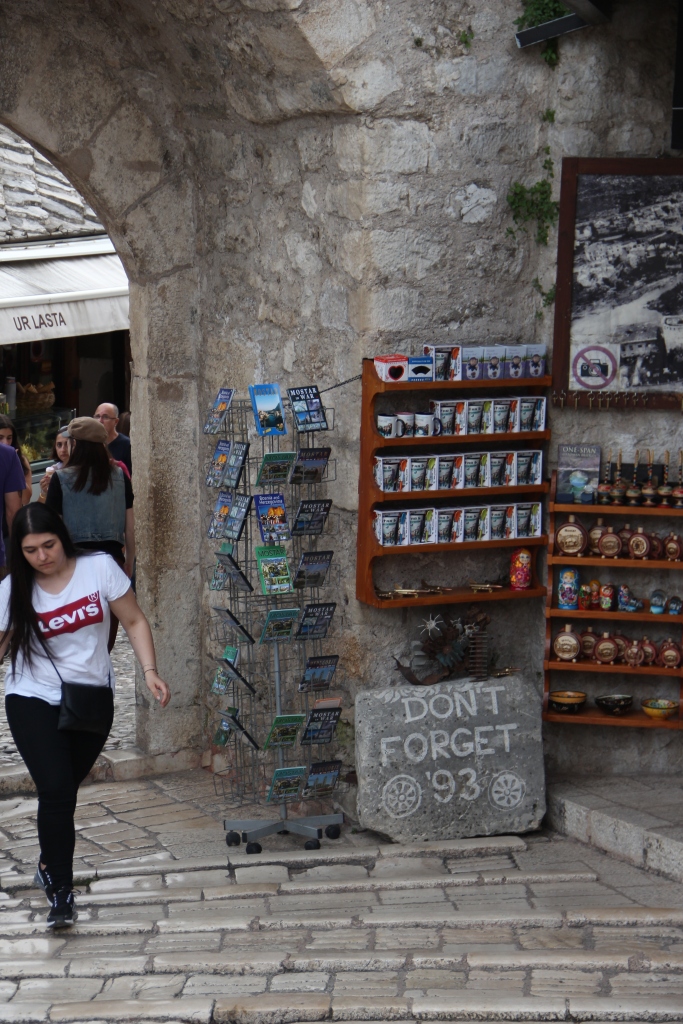 Mostar; slow hum of a call to prayer. Slippery stone steps, smiling faces, eager to share stories. Streets, destroyed by war, rebuilt so soon. The same streets are busy, crowded, but everyone is happy to have the people here. It wasn’t this busy before the war, someone says. The war was less than thirty years ago.

Wandering. Welcomed. The richness of the red carpets inside the mosque, a man kneeling in prayer. High on the tower, the vividness of the river’s blue. A man dives from the bridge.

At our bed and breakfast, there is homemade ice cream in the fridge. It’s rich, like iced cheesecake. The town outside is lively. It’s Friday night in Mostar, and there’s a slow call to evening prayer echoing.

I loved this city in Bosnia and Herzegovina; it’s one of my favorite places that I’ve even been, even with only 1.5 days here, even though all I really did was wander. The winding streets are full of people. The people are so kind. An Ottoman vibe dominates. The river is the most vivid turquoise, flocked by greens, and the bridge is just magnificent.

We arrived in the afternoon; fortunately, our friends had warned us that the inn we were staying at was only accessible via a street that was essentially a footpath, so we checked in first on foot. Then, the innkeeper drove the car down for us, as our friends told us he had done for them- it really was the only way to park, and it still amazes me that he did it at all. It was as if the car was liquid with him at the wheel. As we settled, an afternoon call to prayer sounded. We left to explore.

After crossing the much-photographed Stari Most bridge (The Old Bridge – only a few minutes from our temporary home), we decided to buy a ticket to enter the mosque on the edge of the river and climb its tower to the minaret – quite spontaneously. It was my first time inside a mosque anywhere, and the views from the top of the tower were incredible. We even saw one of the famed jumpers dive from the bridge (after collecting enough cash from tourist, of course). Back on the streets, I stopped to pick out a painted copper piece to take home, and we talked for a long time with the man working. He wasn’t much older than us, and he eagerly shared stories of his experience as a seven year old living in Mostar during the war and how everything had changed. For the better. He was so upbeat, palpably positive. This was the first of several encounters we had with people who were eager to share stories, and we were glad to listen. It was, admittedly, challenging to grasp how this charming and peaceful place could have been completely destroyed and rebuilt, all within my own lifetime. I’m still not sure how to best balance, as a tourist, reverence for the past with the joy and wonder of the present. I’m learning.

Later, we visited a war photography exhibition next to Stari Most. Here, photos of the city during the war taken by a New Zealand journalist are on display, including a photo of the complete destruction of the now iconic bridge. The entire exhibit was simple, which only emphasized its power. It was only us and one other pair inside. We sat for a moment on the pillows in the little self-service cafe on site, watching the bridge jumpers up close, until we left and found stools on the street at a nearby cafe to sit at for Turkish coffee, Turkish tea, and a delish Turkish Delight. Time here is slow. It feels like another world entirely.

For dinner, we sought out the restaurants that we could see with terraces along the river and were happy to find them easily accessed from side streets. We sat at an outdoor terrace, upstairs, with the most stunning view of the Old Bridge and the river. The food was good. Our server was so kind, not too much older than us. At the end of the meal, he brought us a book of wartime photos for us to see. Again, we felt welcomed. We left, full and happy.

We walked home, again along the cobblestone streets, over the mini waterways and the crooked bridge. There was homemade ice cream in the refrigerator of our place, made fresh by the innkeeper’s wife, and we ate that and drank wine. The day had passed so quickly, but it didn’t feel that way. In Mostar, it was as if there was no time. Time didn’t matter at all.

Morning in Mostar began with light rain and a short run out of Old Town to the Metro Station along the river, finishing just before it started to pour. At 9:45 am, the innkeeper once again, thankfully, drove our car up the narrow footpath back to the main road. From there, it was just under a three hour drive to Orebić, Croatia, where we would catch a ferry to the island of Korčula, but first, we stopped at a bakery on the side of the road and bought two pastries for the equivalent of 50 US cents.

Via: Drove 3 hours and 15 minutes in our rental car from Zadar, Croatia (with a stop at Krka National Park along the way). *We used Sixt and filled out the cross-border paperwork when we picked up our car in Zadar.